Can You Help Me Identify This Garden Problem?

Can you help a fellow gardener out? Luann and Tony have been following the high brix garden method for several years and have never seen anything like this. Have you? Unidentified growths on mulch, watermelon, cucumbers, parley and even some weeds look like it came out of a space alien movie.

Any thoughts or suggestions would be appreciated as comments below. Click on the pictures below to enlarge. 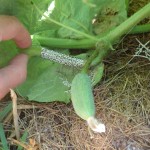 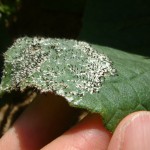 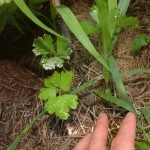 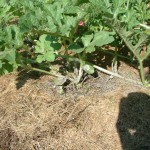 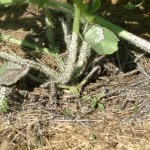 What do you think? Click here to send your feedback >>

What do you think?

Very wet conditions, right? Either sprinkler or excessive rain. Is that grass mulch? And what is the source of the mulch? Is it fungal spores?

Very good pictures. I can’t identify it from experience but it reminds me of a slime mold I have seen on mulch. This one looks like it grew on the pinestraw? mulch and moved to the plants. You can definitely see stalks raised up from the mass. This is a characteristic of at least one type slime mold.

and is mold, source the mulch.

and do not know where you live, but if you have received the rain the NE and Central states have this year, Plus the heat.

Really hate to tell you this….remove the mulch…but may be too late if those spores have exploded...

My first reaction was slime mold as well. It isn’t usually harmful in a vegetable garden but can smother turf if it gets out of hand.

I’m thinking this is actually a good sign that you have an active biotic environment in the garden.

I sent this link to a friend at Cornell University. Here’s her reply:

“That there is a slime mold of some kind. I can’t tell which from the photos. But it doesn’t matter, since slime molds are not plant pathogens, they just climb up on plants to fruit sometimes. Your friend’s slime mold is probably living in the mulch, eating bacteria and junk. When it’s ready to fruit it makes a ton of little fruiting bodies like the ones in the photos. Spores from these can start a new slime mold colony. But really, nothing for a farmer to worry about.”

Thank you all for your insight. Yes, we are very wet in our region this year – northeast Wisconsin. Set to have our wettest summer in last 100 yrs according to area records. Yes that is grass mulch, over some leaf mulch in the first layer. When we first saw the growth, we were unsure if it would sky rocket and take the plants and fruits out. That has not been the case. It is still present, but does not seem to be harming the plants. Now that we have done some searching per your ideas, I do think a slime mold variety nails it. Image search slime molds sometime, wow, nature’s micro art sculptures. Our control plan at this point will be to remove the affected areas in the mulch, scrape off areas where it is on the plants, and appropriately discard. Again, thanks for all your comments. Productive Gardening to Everyone!